The Great Turnip vs Rutabega Debate!

by Bev Perkins • 9 months ago

There was a great debate raging on Turnip vs Rutabega just a few weeks ago on Twitter. 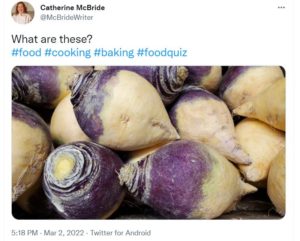 Of course, I could further complicate and throw my oar into this by saying ‘and swede’, but for the purpose of this article, we will remain with the topic. I have just had a nudge from my colleague who tells me that in many countries they don’t even know what a swede is, other than a native of Sweden. Best to stay on the topic at hand! I was also going to mention parsnips – whoops another nudge to stay topical!

The Great Turnip and Rutabega Debate

They both come from the same family and genus, they are both round, they are both root vegetables, so what’s the big deal and do I really care? To be honest, I don’t, but for the sake of all those that spent copious hours on social media, let’s try to solve this problem.

Color and size make a difference

Tthe colours are different – with turnips being white and that lovely vibrant purple on the outside and with very white flesh, whilst rutabagas are not so attractive on the outside (dull beigey yellow and brown, but a lovely orangey-yellow flesh). The fact also that the rutabega is bigger and would win a fight would not exactly miss the attention. In this instance, size does matter, and as far as chefs are concerned the smaller the better on the turnip front, as they classify as ‘baby vegetables’, but more importantly for them, they are ‘I can make more money with mini veg’ category! My husband recently took me to a Gordon Ramsay restaurant, where we ordered turnips to the side for the princely sum of £9.50 (around $12.50 currently). The plate arrived with 3 of the smallest ever turnips each and my husband made a vow never to mention Gordon and turnip in the same sentence again!

Turnips have an earthy but pleasantly bitter kind of taste, like for instance a radish, whereas rutabegas are sweeter overall. You can eat the greens from both, but I find the turnip greens have more flavour as they are more tangy and peppery. I believe that they are popular in the Southern states of the US as an independent vegetable addition to a meal, but don’t see much of that in the UK other than in Caribbean restaurants who call them collard greens, which they do resemble when cooked.

Both are versatile, so to be honest, I really don’t know what the debate is all about; to me, it seems to be a ‘bit-of-a-waste-of-valuable-time’. There is plenty of good nutrition, including fibre and Vitamin C in both, but as rutabegas have a higher sugar and carb content, this is one of the reasons that they are sweeter, but not a potential diet item!

Whilst both of these vegetables can be eaten in the same way, there are subtle differences and preferences to which one you include and where. For instance, turnips are fabulous when grated and eaten raw in a salad, or mixed with celeriac and radishes to make a different type of coleslaw. I make a dish called a winter slaw, which also has finely sliced red cabbage for flavour and colour. The slaw with these veg takes on a whole new profile, mainly caused by the turnip – delicious and slightly peppery, and far more savoury than your standard coleslaw.

Farmers usually harvest turnips when they are small, whereas rutabagas are left to grow larger. When buying, make sure that they are both firm to grip and do store them properly to maintain their condition. Refrigeration is best for both in the crisper drawer at a humid setting, although you can store rutabagas in a cool dark storecupboard or similar, but they don’t stay as firm or maintain their standard for more than a week. 2 weeks in the fridge is best.

I have no idea if I have answered any of the questions, all I know is just create some great recipes, try some new ones and just enjoy!