What Type of Soup Are You?

by Bev Perkins • 1 year ago

All soups have a personality, a different use in life – some are easy, and some are more complicated, so which soup suits you best? It doesn’t matter, it all goes into life’s big melting pot, literally.

Here we discuss the various types of soup that can be created to suit both your palate and your personality!

There are six main varieties of soup with different consistencies and different flavour profiles, so it doesn’t matter if your leaning is towards fish, meat or solely vegetables, they can all be ‘souperlicious’. Get soup-making in the winter certainly, although there are some delightful light summer soups to be made.

The six main categories of soup are:

Clear soups are light, as they have nothing in them to thicken, but that doesn’t make them any less nutritious. They help to keep the digestive system clear, can be somewhat medicinal in their uses (hospitals often serve clear soups if a patient is struggling to eat), or if you feel unwell for any reason.

Broths and consommés are somewhat similar and often confused with bouillons. You can make a broth from almost anything such as chicken, beef and other meats, but also vegetables. A good mushroom broth is also popular. Simply put, they are a soup or the base for another dish, that is made from bones, vegetables, meat or fish simmered in water. Adding herbs can often elevate the broth, or in the case of Far Eastern cooking, herbs or additional flavourings such as lemongrass are frequently used.

It is wise to leave broth to simmer over a period of time to intensify the flavour, particularly if you are using meat or fish.

The difference with a consommé is that it is usually made with ground meats and a mirepoix, which is a combination of vegetables such as carrots, onions and celery. Tomatoes are also added along with egg whites, and after a long period of simmering the mixture, impurities will rise to the surface (frequently called ‘scum’) and settle into a thick layer on the top. Once skimmed off completely, you should be left with a delightful golden colour, rich in nutrition. Pass this through a filter, and you are left with a clear fluid. Any extra fat globules can be skimmed off, should any be left in the clear liquid.

Depending on the texture and flavour you want from a thick soup, you can use corn starch, flour, cream, vegetables etc as a thickening agent. How thick the soup ends up is entirely up to you, but it shouldn’t be overwhelmingly tasting of flour, for instance.

A potage is more stew-like and wholesome, as meat and vegetables are left in chunks or pieces, as 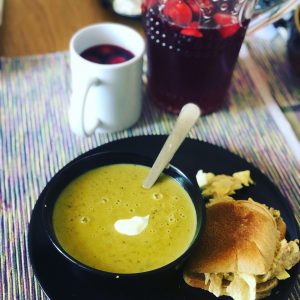 opposed to being blitzed to form a smooth soup. They are great winter warmers. ‘Potage’ is attributed to Northern France and has been around since the Medieval period and is indicative to the high level of poorer people – they would have a potage almost every day, and just keep topping up what was in the pot and adding grains, anything found, foraged, hunted or otherwise was thrown in and the whole process was ongoing. Let’s be honest, it was an unattractive mush, not quite like we would serve today!

Bisque – I have to say my thoughts always turn to seafood when I think about bisque, although these days vegetable variations are popular. Bisque should be thick and creamy, unctuous and the kind of dish you sit on the sofa with your favourite blanket in front of a roaring fire and watching a movie – that kind of comfort dish! Lobster and crab are my favourites – I get satisfaction from cooking off the shells of these tasty creatures and using the blitzed shells as a base. It’s delightfully ‘fishy’ and the aroma is amazing.

Some chefs use rice to thicken the dish, but others keep it simple and finish the soup with hot cream. For pure indulgence, some will also add a large piece of butter. The nearest thing to a bisque is probably a chowder, popular in the US particularly.

Cream Soups – just what they say really. Made from a fairly basic roux (white sauce) with milk or cream to loosen it, then combined with whatever you decide, be it chicken or vegetables, such as tomato, mushroom etc. Seasoning is important, otherwise it can be pretty bland, although it’s still better than pouring it out of a can!

Whatever is your bag, just do it – by hand or using a soup maker, it doesn’t matter, even though I prefer the hand method, it’s much more satisfying to make. Experimenting with soup-making can be a hobby, and a tasty one at that.