Truffle Hunting in Parma, Italy with Coco and Giulio

by Bev Perkins • 2 years ago

I had never heard of the Lagotto Romagnolo breed of dog – but I have fallen in deep and passionate love. Furry, cute, smart and downright lovable – the dog, not me.

To say I am a huge dog fan is a vast understatement – I am obsessed with our furry friends! Please note that I have put Coco the dog first, before the man himself. Was I more excited to see the dog at work than the expert in motion? The answer to that should be obvious! 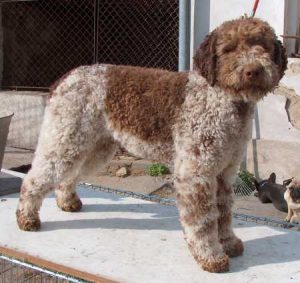 Giulio has been truffle hunting since his childhood years with his father and his grandfather before. On the surface he seems quite dour and stern, but underneath that he is a soft and gentle man, but he does assert a ‘rod of iron’ when it comes to Coco’s behaviour. In my very bad Italian, I understood when he told me that he must be strict with Coco, in order for him to know what his role was when searching for the delicate truffles and to obey the rules. This is so important to protect the truffles from over-digging or over-excitement, which will ruin the fungi.

Our education on truffles started the first evening, with Giulio explaining what we would be doing for the next three days. It was a lot to take in, to be fair, and some of what he told us was quite astonishing. As he is so passionate about his (and Coco’s art), he related that there were many ‘unscrupulous hunters’, who even go so far as to poison the dogs by putting ‘fake smells’ under the ground. When I asked him about visiting San Miniato, our nearest town if he was too busy to take us, he was quite vocal about ‘truffle rogues’ selling inferior products to trap tourists to pay inflated prices. The result of this was he more or less said he would not allow it without him!

Our first day of truffles!

We were up at 6am for breakfast, a wonderful repast of home baked bread, home cured meats and local cheeses. Alessandra, his wife, told us that Giulio ‘liked to get going’ before the sun came up, which was around 7am. Fortunately, as we are early risers, we were ready for our exciting day. Coco seemed to know what was happening and behaved just as a sniffer dog would do – looking forward to his discoveries with anticipation.

After a brisk walk from the farmhouse in light rain, we entered the woodlands for our hunt. It took about 40 minutes before Coco was all but in a state of frenzy and starting to dig furiously into the ground. Giulio shouted some kind of command and Coco started to sniff, rather than dig so excitedly. The next moment, there was a little more shouting, then Giulio bent down and retrieved our first prize, pulling it so gently from the earth! To be honest, I had never seen a truffle so big and so ugly! It seemed to resemble a bulbous, warty nose that you would expect in a Charles Dickens novel. When Giulio wafted it under my nose, I have to say I was somewhat nonplussed – it was earthy, a little stagnant in odour that I wondered what all the fuss was about. Our host was more than happy – it can take a few hours to find your first truffle.

An hour later, and deeper into the woods, we found our next truffle – much smaller and less odious! There was a great deal of ‘tutting and shrugging’ going on, as our host seemed disappointed. He decided that was enough for the day, and that we would go back for a late lunch and try a different area the next morning.

After a delicious late lunch of pasta with truffles and parmesan,  we went for a nap, totally exhausted. How do they do this almost every day?

The next morning, I stayed at the farmhouse while my husband ventured out again with Coco and Giulio. I needed a tour of the kitchen and store cupboard and some of Alessandra’s knowledge on what to do with truffles. Primarily, as a food writer, I must know the product and its uses! I was not disappointed, even though we had to use the translation methods on my iPhone! Why do Italians speak so fast?

Alessandra recommended using the truffles they collect in egg and cheese dishes for strength of flavour. She also made truffle oil and truffle butter. Pasta seemed to be the base of most dinners using truffles as it does not overwhelm the flavour.

Our last day involved a visit to San Maniato and the market, where Alessandra often sells some of her products. Before heading to the airport, we stopped and had a pizza at one of Giulio’s friends’ restaurants – that was one hell of a pizza with grated truffles on the top and no charge!

I have tried truffles in the UK since our visit – they just have not tasted the same.

The Millennial Crisis: Meat or No Meat?

I know that generations before me are going to despise what I’m about to say,...

Tips for Changing to a Plant-based Diet

Nobody said that this would be easy, but more and more of the world’s population...