by Tayla Blaire • 2 years ago

So today I wanted to discuss variety, but from the other side – instead of focusing on one vegetable, I’m going to focus on my home country, South Africa, and some of our favourite dishes. Most of them are filled with regular, everyday vegetables that you’re used to… but with a uniquely South African twist. You probably won’t be able to pronounce these but that doesn’t mean it’s not amusing for me to hear you try.

It’s got hundreds of different names: ugali, nshima, phutu, isitshwala, busima… the list goes on. Essentially, mieliepap is a polenta-type porridge made from ground corn or (‘mielies’, as we call corn here). Pap is a staple food here in South Africa – it’s cheap to produce, easy to make, and filling. Most of the time it is a quick breakfast food but is also a common side-dish at restaurants or braais (also known as ‘barbeques’). Some people like it plain, but I prefer my mieliepap with a healthy dose of chakalaka, a relish made from tomato, onion, carrots, and curry powder. 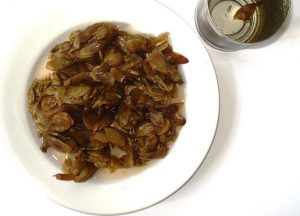 Another difficult-to-pronounce word, waterblommetjiebredie essentially means ‘small water flower stew’. On a quick side note, Afrikaans is delightfully literal sometimes: their word for ‘run’ is ‘hardloop’, which translates literally to ‘hard walk’. This is usually a lamb stew with onion, potatoes, garlic, and herbs with the key ingredient being two little flowers: one that is unsurprisingly known as the waterblommetjie and sometimes the other being the Cape Sorrel.

While this is one of the few easily pronounceable words in this list, it isn’t what it seems. Bunny chow contains no bunnies, nor does it contain any chow-chows. The early Indian settlers in South Africa were originally employed to work on sugar plantations outside of Durban on South Africa’s east coast. These families were desperately poor in those days, so they had to make do with what they could afford – vegetables and bread. Extrapolating on the curry recipes they knew from the old country, the Bunny Chow was originally a vegetarian curry (usually with potatoes, tomatoes, onion, carrots, and cauliflower) stuffed inside a hollowed-out quarter loaf of bread. These days, the Bunny Chow has evolved into an iconic South African dish.

This dish has the particularly lofty honour of being one of Nelson Mandela’s favourite recipes: samp and beans. Samp is a variety of cornmeal where the kernel is crushed or stomped on until broken, so certainly not as finely ground as what one expects of cornmeal. This dish comes in several variations, but most involve samp as the main ingredient with sugar beans and a variety of vegetables to add texture, flavour, and nutrition. One of the most well-known varieties combines samp and sugar beans with potatoes, onions, chillies, lemons, and peas.

Rooibos literally translates to ‘red bush’, and the tea is made from a common shrub-like plant that grows along the Eastern and Western Capes of South Africa. Rooibos has been a staple in southern Africa since time immemorial and only in the last twenty or so years has it gained international popularity. If you’re truly a South African, you don’t drink rooibos like the English with milk and sugar (blasphemy!) You will only drink rooibos with a splash of lemon juice and maybe some honey if you need some extra sweetness.

Tayla Blaire is a South African writer, teacher, epicurean, and (most importantly) mother to all cats. Tayla has been thinking (and subsequently writing) about food since she was a tiny tot after her mother taught her that measuring ingredients was for the weak. If you’re interested to see what Tayla has whipped up recently, check out her Instagram profile @tayla.blaire to see the recipes that she has lovingly filmed in her very own too-small kitchen.

Here are Simply Souperlicious we love our veg – as you well know by now!...

Are You Afraid of (Cooking in) The Dark?

Sometimes, living in South Africa can teach you a very specific set of skills that...