Bouillabaisse Day – a Feast of Fish!

by Bev Perkins • 1 year ago

Ooh, bouillabaisse – I dream of it, a really traditional rustic and lip-smackingly delicious bowl of fishy goodness. If I was a cat, I’d be licking my whiskers!

Make no mistake, it’s not for the fainthearted or occasional lover of fish, it tastes fishy, it smells (fresh) fishy, and you could end up with the occasional bone, fin, or other part of a fish’s anatomy – if you eat the very traditional version. After all, it was a dish created by fishermen for fishermen in the early days of its existence. It has been somewhat refined by chefs and restaurants however, to ensure that the best fillets are eaten, and there are no fish skeletons in your bowl, resembling those you may see in the odd cartoon!

The 14th  of December is the day when you should get out your fish hat and start cooking, although the very best bouillabaisse is made over a two-day period. Fishermen in Marseilles cooked this dish by using rock fish, which they couldn’t sell at markets or to fishmongers as it was purportedly of poor quality. As usual, both individuals and countries lay claim to the dish, but the Provencal region has a strong hand on the situation and will never give this popular bowl away to pretenders! Frankly, let the French have it, from my experience I have always eaten bouillabaisse where I believe it belongs. So, for the sake of argument, let’s say the French invented it around 1800, and leave it at that!

So what delights are in this famous ‘soupy stew’? Before we go further, it’s not any old fish, it must be fresh and smelling of the sea. Any eyes must be bright, the flesh plump and firm, and the scales nice and shiny. Often, you won’t find fish like that in a supermarket. If you are lucky enough to live by the sea or a fresh fish market, don’t hesitate to go there for your produce, it’s the only way if you want an authentic-tasting dish. 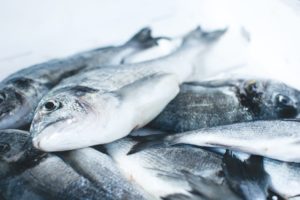 Quite simply though, what genuinely makes a bouillabaisse so flavoursome is what you put in the pot with the fish. It’s important to inject some depth of flavour into the broth. There is no set rule for any of the ingredients, but there are some that should not be left out. My favourite recipe is by the well-renowned Julia Child, whom I adore as a chef and author, but that’s not to say you can’t deviate and include what you like to eat. Julia kept hers relatively simple, using some quaint sayings such as ‘ensure the broth is fortified with shells and trimmings!’ Who uses those terms today?!

Probably the most noticeable ingredients in every recipe I have read are red and grey mullet, hake, monkfish, langoustines, spider crabs and mussels. Vegetables are usually leeks, onions, potatoes, celery, tomatoes and potentially the subtle flavour of fennel, although quite a few chefs now prefer to put the alcohol Pernod into the soup, to imitate the aniseed-style taste. Herbs are vitally important – those such as bay, thyme, parsley and saffron, stalks and all. Garlic of course, will appear somewhere, either in the soup or in the rouille that accompanies it.

I love the way it is served down in Marseille, having spent so much time there. I never went to a restaurant that just ladled it all into a bowl – the fish and the broth were brought to the table separately, and then put together in a separate bowl. This seemed the most popular, but I have also had it with the broth served first with the rouille and crusty bread, followed by the fish on a separate plate. I don’t mind either way to be honest, but there is something more ‘complete’ when it all comes together, and it certainly confuses foreign diners who aren’t aware of the alternative but traditional serving method! You can see them staring around the restaurant and you know their expression means ‘where’s the fish’?!

I have no further words of wisdom other than always make your own, or have it made freshly by someone who knows about it. Canned or otherwise just won’t crack it.

The Millennial Crisis: Meat or No Meat?

I know that generations before me are going to despise what I’m about to say,...

Tips for Changing to a Plant-based Diet

Nobody said that this would be easy, but more and more of the world’s population...